As a co-founder of the 501c (3) non-profit organization, the Common Ground Network, Dr. Wang has dedicated his life to helping people find common ground and solutions to problems so they can be more successful and fulfilled in their lives.

As a teenager, Ming fought valiantly to escape China’s Cultural Revolution – during which millions of innocent youth were deported to remote areas to face a life sentence of hard labor and poverty. He came to America with only $50 and earned two doctorate degrees, one in laser physics and one in medicine, and graduated with the highest honors from Harvard Medical School and MIT.

Dr. Wang has published 10 ophthalmology textbooks, over 100 scientific papers including one in the world-renowned journal “Nature”. He holds several U.S. patents for his inventions of new biotechnologies to restore sight including world’s first amniotic membrane contact lens, and performed the world’s first laser artificial cornea implantation. Dr. Wang has performed over 55,000 procedures including on over 4,000 doctors.

Wang Foundation for Sight Restoration has helped patients from over 40 states in the U.S. and 55 countries, with all sight restoration surgeries performed free-of-charge. Dr. Wang was named the Kiwanis Nashvillian of the Year for his lifelong dedication to help blind orphaned children from around the world.

Dr. Wang has received numerous awards including the Honor Award of the American Academy of Ophthalmology, the Lifetime Achievement Award of the Association of Chinese American Physicians, an honorary doctorate degree from Trevecca Nazarene University, and NPR’s Philanthropist of the Year Award.

Over a dozen years ago, Jerry shared his Vision for Living Sent Ministries with Dr. Wang. From that Nashville restaurant meeting, Dr. Wang and Jerry became close friends and they have been encouraging one another to build God’s Kingdom at work ever since. Dr. Wang has served on the Ministry Advisory Council for over 10 years. Dr. Wang is also the founding president of Living Sent Ministries President’s Club.

Dr. Wang and his wife Anle live in Nashville, TN with their three cats: Spaghetti, Tennessee, and Liliy. Dr. Wang is a champion amateur ballroom dancer and was a finalist in the world pro-am international 10-dance championships. Playing his erhu, he accompanied country music legend, Dolly Parton, on her album, Those Were the Days.

Known also for his work in philanthropy, Dr. Wang organizes an annual classical ballroom dance charity event, the EyeBall, which has drawn attendees from all across the U.S. and around the world.

Dr. Wang’s autobiography, From Darkness to Sight, is an inspirational story of how one man turned fear, poverty, persecution, and prejudice into healing and love for others. It demonstrates how focus, determination, humility, and profound faith can inspire a life that, in turn, impacts the lives of countless others. The book has inspired an upcoming movie called “Sight.” 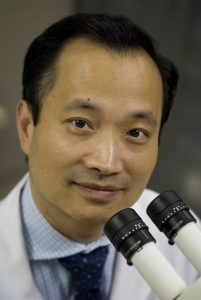